Being a lousy advocate: Me and DRM

DRM, You’ve probably heard of it. Digital Rights Management. Bane of legitimate users, irritant of illigitimate users, hopeful tool of content owners. By those 3 statements, I mean to simply point out that the DRM effort ultimately fails completely. To the public, it seems like Industry Execs implemented DRM simply because they wanted to prevent piracy. To the conspiracy theorist, DRM was implemented because those execs wanted to force consumers to buy the same content again and again. They say that it’s really about you having to buy a movie once for your TV, and once again for your iPod. For the Media industry itself, it’s a way to protect their investment from malicious thieves. The internet is full of people who want to watch everything they offer, but refuse to pay for it. It’s downright Un-American.

The trouble (and what I’m saying is not new) is that DRM does it’s job quite poorly. DRM is supposed to prevent intellectual property piracy. Unfortunately DRM doesn’t prevent piracy. The people who are truely interested in pirating whatever it is that’s locked up are the same people who happen to have the time and the resources to eliminate the barriers in their way. The CSS protection on a DVD won’t stop the guy producing 100,000 copies of that DVD and selling them. What DRM does is prevent a causual user from doing what he or she likes. It’ll probably stop your Mom from copying that DVD onto a video tape so the kids can watch Toy Story while visiting Grandma (but really, even Grandma has a DVD player at this point, cmon!)

I don’t like DRM. I bought this movie to watch it. I bought this Music to listen to it. I bought this game to play it. I didn’t buy it so you could tell me when, where, or how to watch, play, or listen. The dedicated advocates hold to their word. Until Apple stopped selling DRM-laced mp4s, they didn’t shop on iTunes. Until they could buy that eBook with no lockdown, there was no sale. I’m not as good as they. My computer is full of DRM locked materials. In part this is because I feel a moral and ethical obligation to buy my media. I don’t have a problem with buying media. The industry I think has this expectation that no one wants to pay for things. I admit that there is a set of people that just want to get all of their media for free. Most people I think are willing to pay for their media, but only on acceptable terms. That is to say “I can watch what I want, when I want, where I want.”

So I but my media because I think it’s the right thing to do, but I don’t like that I get locked down by one method or another. An XKCD comic explians the inevitable problem you face when you purchase DRM-laden material: 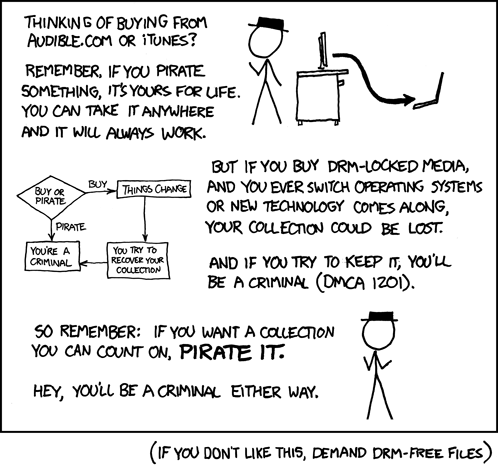 There’s not really a way around it. In fact, the Recording industry (or rather, one of their lawyers) came out and said that users shouldn’t expect to be able to access DRM-protected material forever. I don’t think it’s an unfair statement. Formats are subject to the realities of time and progress. If you’ve got an 8-track collection that you’re still clinging to, your options for new equipment are limited. Conversley, if you have such equipment, the medium has also slowed and dropped off out of production.

The trouble here is that the change in technology availability isn’t a matter of market forces, but is an arbitrary decision made by a company who no longer wants to support a particular choice they made. Market forces almost universally mark shifts gradually. In one particular case WalMart announced they were going to shut down their DRM servers, rendering purchases made even a week before worthless. The backlash was so strong that WalMart kept their support servers up for another year.

The greater issue at hand is obvious. If a company can arbitrarily decide when (and where) a piece of media can be played, then they have market control by threat (rather than by natural market forces). In part this is why Apple has had such a strong market with the iPod. People don’t want to lose their music and so remain connected with the iPod environment. Such power breaks the normal market forces and creates a large barrier of entry for other market players. I’d like to think that the iPod’s continued market dominance is due to other factors like product superiority and familiarity, but it can’t be denied that lock-in is a factor.

So I’m stuck in the middle here. On the one hand I want to be a good market citizen and encourage growth. On the other hand, I don’t want to be stuck with anybody (even Apple, whom as mentioned before I am quite attached to.) The XKCD option sometimes seems like the most logical. You’re a criminal either way, so you might as well be on your own terms.